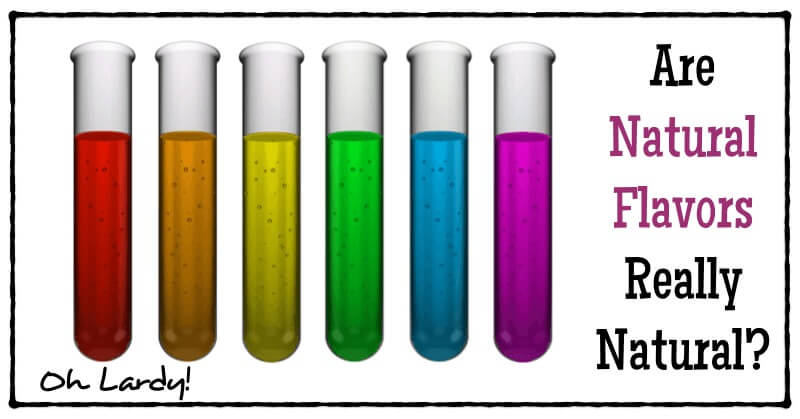 The flavor industry is worth billions. Flavor engineers are paid big bucks to make sure you never know the difference between “natural flavors” and the real thing. Chemists working for half a dozen companies make approximately 80 percent of all the natural and artificial flavors in the world to please consumers with convincing tastes and aromas they find delicious and appealing. So what constitutes a natural flavor? Certainly nothing natural. 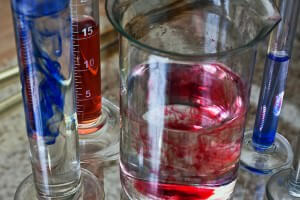 There are hundreds of different flavor compounds that are derived from amino-acids, fatty acids, carbohydrates and other nutrient pathways to achieve specific a taste and smell.

Companies like Givaudan and Cargill create and manufacture flavors for a wide variety of foods, beverages, confections, pharmaceuticals (including chewable medications and liquid prescriptions), oral care products (like toothpaste and mouthwash), cosmetics (including lip balm), nutrition products (vitamins and sports gels), and even pet food. And in fact, the general principles they follow are very similar to what’s done in the perfume industry.

Although these companies are responsible for ensuring their products are safe for human consumption (which includes preventing allergic reactions or avoiding toxicity), no long-term studies are ever pursued in humans to find out what those effects actually are. Priority number one for the industry is to help the food companies make huge profits, not ensure human health and safety.

What’s The Difference Between Natural and Artificial Flavors?

Natural and artificial flavors are defined for the consumer in the Code of Federal Regulations. A key line from this definition is the following: “a natural flavor is the essential oil, oleoresin, essence or extractive, protein hydrolysate, distillate, or any product of roasting, heating or enzymolysis, which contains the flavoring constituents derived from a spice, fruit or fruit juice, vegetable or vegetable juice, edible yeast, herb, bark, bud, root, leaf or similar plant material, meat, seafood, poultry, eggs, dairy products, or fermentation products thereof, whose significant function in food is flavoring rather than nutritional.” So the flavor has no other function but to fool the brain into thinking it is consuming the real thing. Just as their artificial counterparts, all natural flavors are created in labs with chemicals. Food companies take the definition and through legal loopholes can actually create biosynthetic compounds identical to the real thing, but they’re not the real thing. Bottom line is they are still artificially created flavors, but they are permitted the “natural flavor” label due to the formal definition.

There is less a matter of legal definition than the “real” or practical difference between these two types of flavorings. There is little substantive difference in the chemical compositions of natural and artificial flavors. They are both made in a laboratory by a trained professional, a “flavorist,” who blends appropriate chemicals together in the right proportions. The flavorist uses “natural” bioidentical chemicals to make natural flavorings and “synthetic” chemicals to make artificial flavorings. The flavorist creating an artificial flavoring must use the samechemicals in his formulation as would be used to make a natural flavoring, however. Otherwise, the flavoring will not have the desired flavor. The distinction in flavorings–natural versus artificial–comes from the source of these identical chemicals and may be likened to saying that an apple sold in a gas station is artificial and one sold from a fruit stand is natural.

This issue is somewhat confusing to the average consumer in part because of other seeming parallels in the world. One can, for example, make a blue dye out of blueberry extract or synthetic pigments. These dyes are very different in chemical composition yet both yield a blue color. Similarly, consider one shirt made from wool and another from nylon. Both are shirts, but they have very different chemical compositions. This diversity of building blocks is not possible in flavorings–one makes a given flavor only by using specific chemicals. Thus, if a consumer purchases an apple beverage that contains an artificial flavor, she will ingest the same primary chemicals that she would take in if she had chosen a naturally flavored apple beverage.

When making a flavor, the flavorist always begins by going to the scientific literature and researching what chemicals nature uses to make the desired flavor. He then selects from the list of flavor components found in, say, real apples, generally simplifying nature’s list to eliminate those chemicals that make little contribution to taste or are not permitted owing to toxicity. (Nature has no restrictions on using toxic chemicals, whereas the flavorist does.) The flavorist then either chooses chemicals that are natural (isolated from nature as described above) or synthetic chemicals (made by people) to make the flavor.

The search for “natural” sources of chemicals often requires that a manufacturer go to great lengths to obtain a given chemical. Natural coconut flavorings, for example, depend on a chemical called massoya lactone. Massoya lactone comes from the bark of the Massoya tree, which grows in Malaysia. Collecting this natural chemical kills the tree because harvesters must remove the bark and extract it to obtain the lactone. Furthermore, the process is costly. This pure natural chemical is identical to the version made in an organic chemist’s laboratory, yet it is much more expensive than the synthetic alternative. Consumers pay a lot for natural flavorings. But these are in fact no better in quality, nor are they safer, than their cost-effective artificial counterparts.

Both types of flavoring have been linked to neurotoxicity, organ, developmental, reproductive toxicity and cancer.

How Flavor Engineers Get Us Addicted To Foods

Indeed, the sense of taste is a multifaceted physiological process. Working in conjunction with our sense of smell, our 100,000 taste buds elicit sensations of sweet, bitter, sour, salty, and umami (a Japanese word for a pleasant savory taste, but distinct from pure saltiness). The challenge for flavor chemists is to create the perfect mixture of compounds that hit all the right marks and they do a magnificent job in fooling the public.

How do they master their science? They know exactly how the human mind and the body’s receptors work. The brain’s pleasure center is known to proceed through nerve cells that signal using the neurochemical dopamine. Dopaminergic neurons exhibit a “remarkable capacity” to pass on pleasure signals. Unfortunately, the evolutionary processes that attached pleasure to advantageous behaviors also accidentally reinforced bad ones.

Addiction to all four major classes of abused drugs — psychostimulants, opiates, ethanol and nicotine — has been linked to increased dopamine transmission in the same parts of the brain associated with normal reward processing. Cues that predict both normal reward and effects of cocaine or alcohol also make dopamine nerve cells fire as do the experiences they recall.

When flavor engineers design their chemical concoctions, they have a profound understanding of these biological systems and the molecular events that form such “reward memories” so that people become addicted to foods.

MSG (monosodium glutamate) is a good example. It hides behind dozens of names in thousands of foods, such as natural flavouring and yeast extract. MSG is not a nutrient, vitamin, or mineral and has no health benefits. It is an excitotoxin which are substances, usually amino acids, that react with specialized receptors in the brain in such a way as to lead to destruction of certain types of brain cells. Excitotoxins stimulate the reward system of the brain, so we think it tastes better (than it actually does) and consequently consume more.

Secret Tricks of The Trade

And their work is serious business. Companies consider their formulas to be valuable intellectual property, hence their secretive nature — not to mention the fact that most food manufacturers would rather not have it known that most of their processed foods are flavored with a cornucopia of chemicals.

Flavor chemists use a variety of compounds to create their formulas. A typical lab uses of 2,000 chemicals and 500 natural flavors — and it can take anywhere from 70 to 80 tries to get the flavor just right. Some formulas require upwards of hundreds of different trials.

When trying to simulate the taste of chocolate, for example, flavorists will use substances that individually taste and smell like potato chips, cooked meat, peaches, raw beef fat, cooked cabbage, human sweat, dirt and other distinctly un-chocolate-like aromas. And in fact, in some cases it can get quite weird; some strawberry and vanilla flavors are derived from the gland found in a beaver’s backside.

Once the compounds have been selected, the chemists use a “flavor profile” to help them architect the taste they’re trying to simulate. This profile is typically constructed with mathematical assistance, allowing the chemists to make the most minutest of adjustments — what’s typically measured in parts per million (ppm). These adjustments can create super flavors where the taste of let’s say strawberry is concentrated 10 or 20 times then diluted throughout the food products of choice depending on how various chemicals might react to one another, and whether the mixtures will lend themselves to cooking.

A study last year made headlines after it raised concerns about chronic exposure of workers in industry to a food flavoring ingredient used to produce the distinctive buttery flavor and aroma of microwave popcorn, margarines, snack foods, candy, baked goods, pet foods and other products. The artificial butter flavoring ingredient Diacetyl (DA) was found to penetrate the blood-brain barrier and intensify the damaging effects of an abnormal brain protein linked to Alzheimer’s disease.

Another common chemical that’s used is ethyl butyrate. It’s one of 30 compounds that are typically found in orange juice. This chemical, along with acetaldehyde, is what gives OJ its succulent quality. Other chemicals include butyric acid artificial and butyric acid natural. Isoamylacetate is typically used to mimic the taste of a banana, while methoxyfuraneol is used to simulate strawberries.

One of the great scams of the industrial food cartel is the so-called “fresh” orange juice sold in supermarkets. There is a great video from author Alissa Hamilton who wrote a book on the subject called ‘Squeezed: What You Don’t Know About Orange Juice.’

The list of chemicals that are used to flavor a single food can get quite extensive. It can take upwards of 300 individual compounds to endow a food with the flavor associated with a ripe strawberry and 400 volatiles to give a food the aroma of tomatoes. The concentration of these compounds will vary from food to food and can be measured between 10 to 100 ppm — and even as sparse as one part per billion.

The commercialization of natural flavors has increased more than 67% in the last decade alone. Many health conscious consumers are now avoiding artificial flavors so the industry is ramping up efforts to replace artificial flavors with natural ones, but essentially there is little difference. Don’t be fooled.

Natasha Longo has a master’s degree in nutrition and is a certified fitness and nutritional counselor. She has consulted on public health policy and procurement in Canada, Australia, Spain, Ireland, England and Germany.

Disclaimer: This article is not intended to provide medical advice, diagnosis or treatment. Views expressed here do not necessarily reflect those of Waking Times or its staff.

This article is offered under Creative Commons license. It’s okay to republish it anywhere as long as attribution bio is included and all links remain intact.

Ditch the artificial flavors with this natural toothpaste!

Pin it for later–> 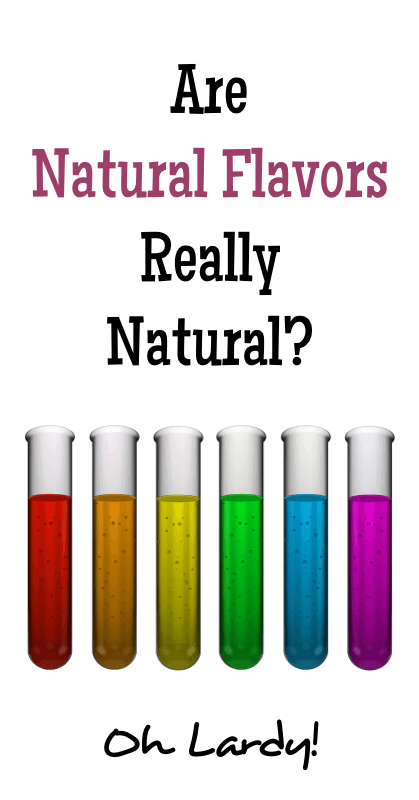