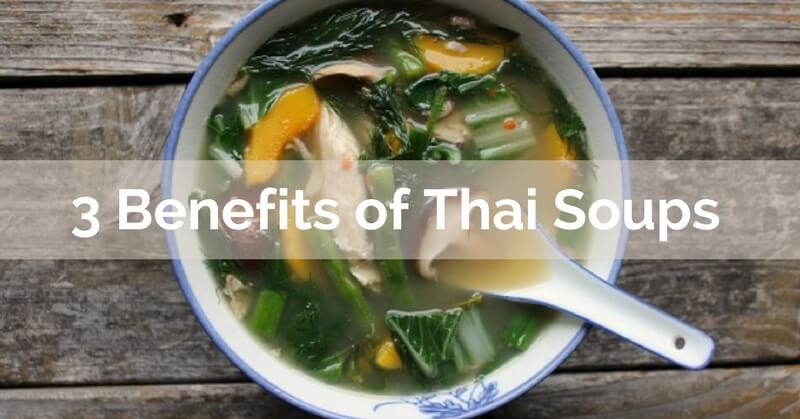 Unless you’re from Thailand, you’re probably unaware of the many benefits of Thai soups. In fact, I’m going to guess you can only name, at most, two Thai soups – tom yum (a hot and sour soup) and tom kha gai (a coconut chicken soup with galangal).

These are the only Thai soups I could name myself until a recent trip to Thailand exposed me to its incredible diversity of traditional soups. Unlike in America, soups are an everyday part of Thai cuisine. They’re a part of the iconic street food culture, bustling markets and even monasteries.  Everywhere you go you’ll find big simmering cauldrons of broth and soups with all sorts of colors, aromas, herbs and spices.

As a soup fanatic, let me tell you I was like a kid in a candy store. Oh how I love love LOVE the salty, sour, sweet and spicy soups of southeast Asia!

Man I could slurp on ‘em ALL DAY LONG.

Now I’m also a Nutritional Therapy Practitioner and so I was equally fascinated by the many health benefits of these soups. I started realizing that Thai soups could offer a lot of help to people back home in America suffering with digestive issues. It actually inspired me to write a book about Thai soups called The Thai Soup Secret. I wanted to show my fellow Americans that there’s a lot more Thai soups than just tom yum and tom kha gai.

So today, I’m going to share three of the six secrets from my book. These are some little known benefits of Thai soups to inspire you to start making them yourself. And I’ve already told you the first one!

1 – Many Thai soups are good for your gut

If you read Tamara and Kelly’s blog regularly, you know that essential oils come from plants and have powerful aromatic compounds with many health benefits.

Well, soups are a wonderful medium for administering the healing power of medicinal plants, including their oils. As they simmer in broth, they release their oils, nutrients and phytochemicals, diffusing their aromas and wonderful flavors which make them so enticing to the nose and tongue.

Most Thai soups are infused with the aromatic oils of traditional Thai herbs which give them their quintessential Thai aromas and flavors. Three of the most common ones are lemongrass, galangal and kaffir lime leaves, which you can easily find in any Asian food store (if you don’t have an Asian food store near you, www.importfood.com is a great place to order good quality, fresh Thai produce online.) They’re also highly valued by the Thai people for their many health benefits including common digestive issues.

Beyond the aromatic herbs, a few other reasons Thai soups are so good for gut health is that many are naturally gluten and dairy-free and many are broth-based. Tamara and Kelly have written extensively about the benefits of bone broths so I won’t go into detail about that but what I will mention is that Thai bone broths are a little different than the bone broths we typically make in the West.  And this can be a huge benefit it you’re not a fan of simmering broths for hours on end on your stove top.

In traditional food circles in the West, it is often recommended to simmer bone broths for very long time periods. Long simmer times helps to leach more nutrients from the bones and results in a more nutrient-dense broth. Interestingly, this is not how it’s done in Thailand.

A typical simmer time in Thailand is between 1-4 hours with most tending towards the shorter end of that spectrum. This short simmer time results in a fairly light and often times a clear broth.

This also means that most Thai broths are NOT gelatinous. While gelatin-rich broths are a good source of many gut-healing amino acids like proline, glycine and glutamine, this doesn’t mean there isn’t a place for shorter cooked and lighter broths.

In fact, sometimes lighter broths are easier on the body’s digestive system. Although it won’t be as nutrient dense as a gelatinous broth, many of those nutrients can be replaced and enhanced from other ingredients in both the broth and the soup itself such as herbs, spices, meats and vegetables.

A shorter cooking time certainly makes the process a lot quicker and easier. Longer cooked broths often bring up some logistical concerns too as many people are not comfortable leaving their stove top on overnight or when they’re not home. And if you’re planning on using that a broth for dinner tonight, well, you’d better plan ahead. A shorter cooked broth doesn’t present those issues and for most people today that’s certainly a good thing.

It’s also interesting to note that many Thai broths and soups are made together in one step, further simplifying the process. Typically in the West, we make a bone broth first and then use that broth to make a soup later.

But in Thailand, the bones are often simmered in water with the other soup ingredients and then the bones are discarded before serving. Or sometimes those bones are meaty bones like chicken thighs or pork ribs and remain in the final soup recipe. We don’t usually include bone-in cuts of meat in soups in the West but this is very common in other countries, especially throughout Asia.

For example, one of the simplest recipes from my book is Tom Saap, a traditional pork ribs hot and sour soup. 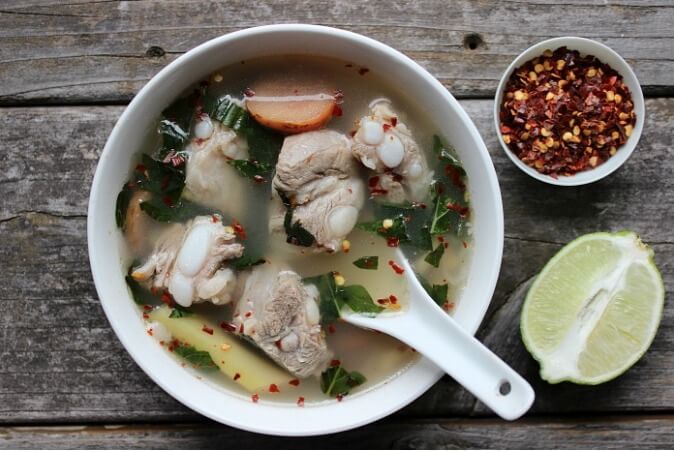 It’s made by simmering pork ribs in water with Thai herbs for about an hour. When it’s done, you’ve got a nice lightly flavored pork broth with perfectly cooked pork ribs. It’s then flavored with additional seasonings, to taste, such as lime juice, chiles and fish sauce.

To belabor the point…

3 – Many Thai soups are super easy to make

Unfortunately, many people are intimidated by Thai cuisine. It’s certainly true that many aspects of Thai cooking are somewhat complicated. For example, making a curry paste is time consuming and uses lots of ingredients that are not always easy to find in one place. This is one of the many reasons I don’t include coconut curries in my book.

First of all, coconut curries are not really soups. They’re more of a rich, coconut milk-based stew.

And second, few Americans want to spend an hour pounding herbs and spices in a mortar and pestle into a paste. This is why canned and jarred curry pastes are so popular. But so many are full of chemicals. And they ALL lack the incredible flavor of a freshly made paste.

But Thailand also has hundreds of simple, broth-based soups which are super easy to make via very short-cooked broths. These are the soup recipes I focus on in my book. And there’s probably no better example than tom yum, Thailand’s most famous soup.

Let me show you! Here’s the video demo from the homepage for my book:

So many Thai soups follow a similar formula, that being, simmering aromatic herbs and spices in broth, followed by various veggies and meats. They all come together in 20-30 minutes and you can make large portions that can be easily re-heated throughout the week for quick and healthy 5 minute meals. 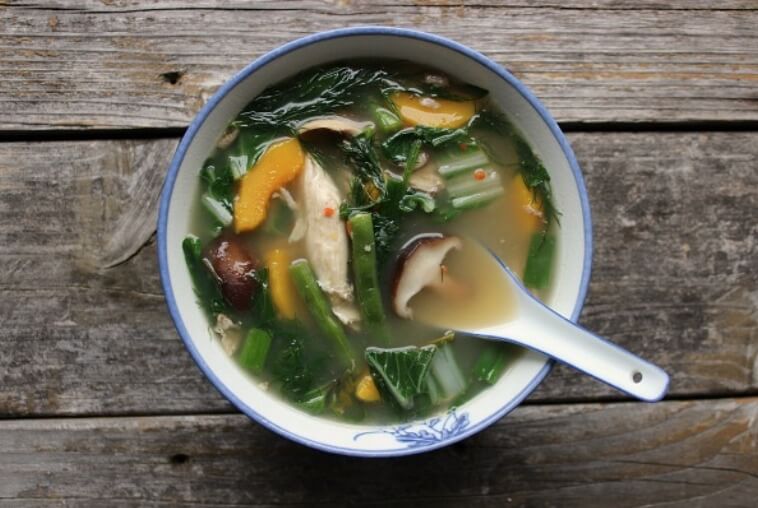 You can whip that baby up in just a few minutes. And here’s one of my favorite quick and easy Thai meals, jok (pronounced joke), which is a broth-based congee: 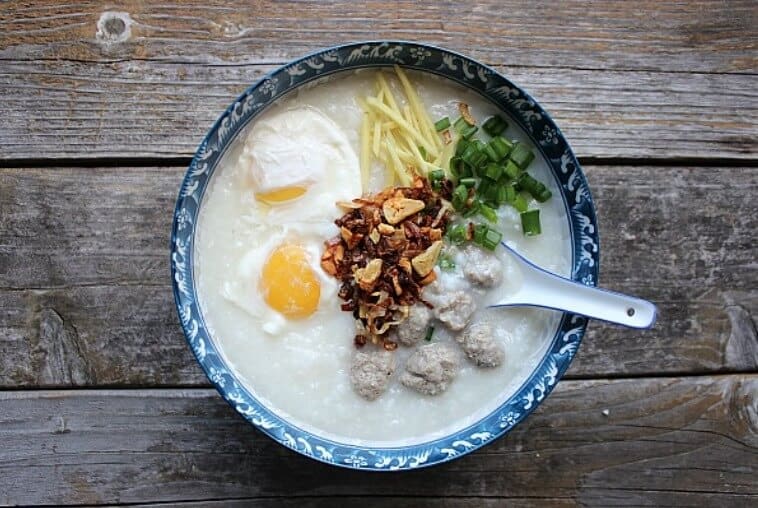 And here’s a Thai basil pesto soup with shrimp and vermicelli rice noodles: 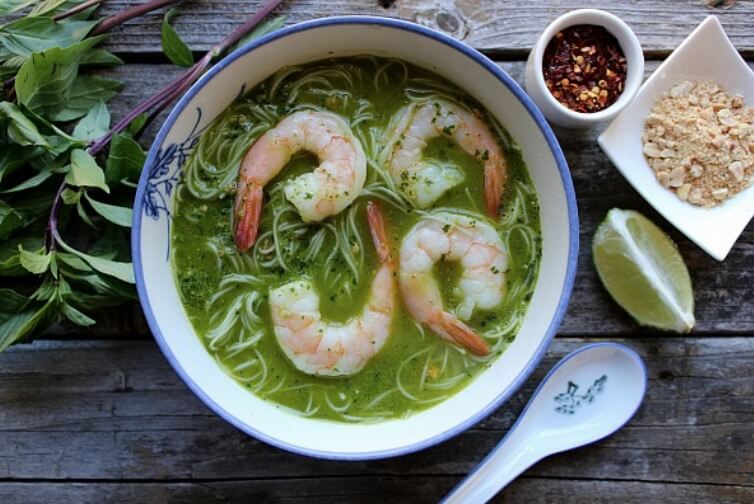 If you have those time-sucking things called a “job” and “kids,” having a repertoire of simple soup recipes you enjoy can be so very helpful.  Of course, it helps to like Thai food too!  If a trip to Thailand is not on you agenda anytime soon then The Thai Soup Secret will be your next best option for discovering the relatively unknown world of Thai soups. It includes 40 simple Thai broth and soup recipes that anyone can make. 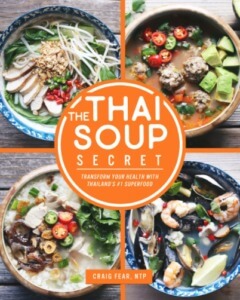 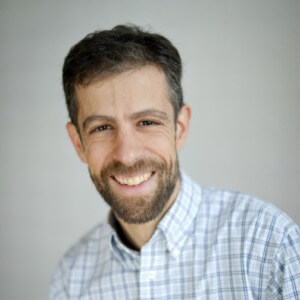 Craig Fear is a certified Nutritional Therapy Practitioner (NTP) who specializes in helping others with chronic digestive issues.

Before becoming an NTP, Craig traveled extensively in southeast Asia, which kickstarted his love of broth and soup. His training as an NTP taught him how real broths and soups help fix digestive issues such as heartburn, GERD, IBS, dysbiosis, leaky gut and more. This eventually inspired him to travel back to Thailand to learn (and eat!) more.

Craig is the found of the blog Fearless Eating where he shares recipes and digestive health tips. He is also the author of The 30-Day Heartburn Solution and Fearless Broths and Soups 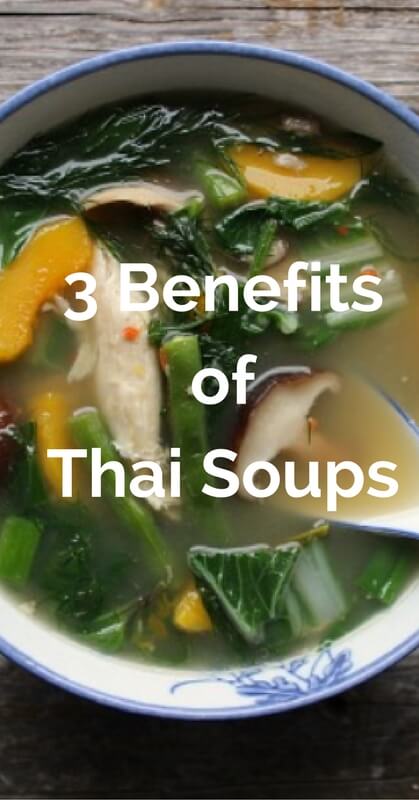